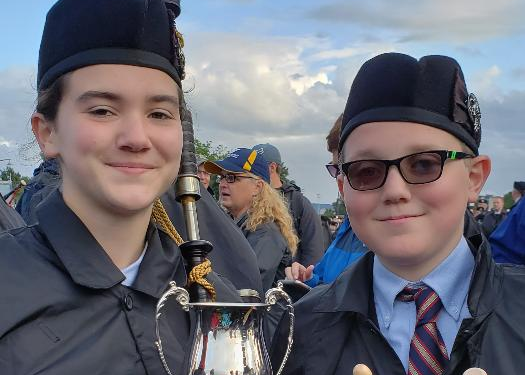 Tech Valley High School Sophomore and bagpiper Zoey Flansburg returned to school this year with a unique accomplishment added to her resume after being part of a world champion band at the 2019 World Pipe Band Championships in Scotland. Zoey and her brother Alex are both members of the Capital District Youth Pipe Band which competed against 20 other bands in their performance class.

The band consists of bagpipers and drummers from up and down the east coast including New York, Vermont, Massachusetts, New Jersey, Pennsylvania, Virginia and Florida. The ensemble also competed at the International Highland Games in Scotland and placed second in that event.

The band is led by Director Maureen Connor. CDYPB is a not-for-profit organization that provides professional instruction on bagpipes and Scottish drumming for children ages 8 to 18. The band performs in numerous concerts, parades, and competitions, and has won prizes in the Eastern United States, Canada, and in Scotland, where they also won the World Pipe Band Championships in 2012.